When it comes to remodeling or building a new kitchen, one of the most important features to consider is the range hood. At the heart of every kitchen is the stove, where all the delicious meals you serve your friends and family take form. However, when you cook, the smoke and particles released tend to hang in the air. With the help of an air filtration system, you wouldn’t have to deal with this issue. Manufacturers such as Vent-a-Hood, Faber, and Zephyr are one of the trusted brands in home kitchen ventilation.

Also called a vent hood, a range hood effectively removes unpleasant smells and unhealthy smoke that lingers in the air during and after you’re cooking.

This type of hood is one of the most common you’ll see in a lot of households. It’s an economical choice that fits with numerous different kitchen designs. As the name suggests, the range hood is installed under the kitchen cabinets and above the range or stove, spanning the length of the stove to catch the smoke and heat as they rise and before they reach the cabinet surface.

Under cabinet vent hoods are easy to install and can cost less than the other types of hoods. There is also a multitude of designs that can match your kitchen’s aesthetics. Many under cabinet hoods include ducts that carry the smoke and other airborne particles out of the room to outside; there are also ductless versions that recirculate the air within the kitchen. We recommend under cabinet range hoods with ducts as they are more effective; however, they do cost more than the ductless version and will require more steps to install. 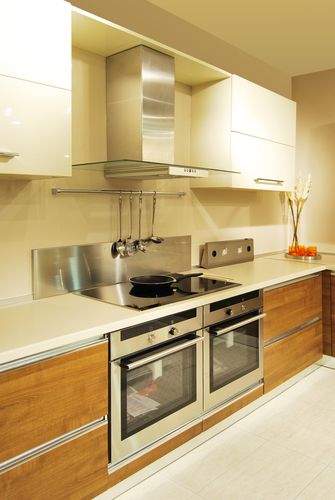 For ranges that are set up in spots where there are no kitchen cabinets over them, a wall mount installation is a suitable option. Wall mounted vent hoods are also called wall-mounted chimneys because they look like a traditional chimney. Wider at the bottom and stretching the full length of the range (the same with other under cabinet range hood models), a wall mount range hood can catch the smoke and other particles that rise up. This type of range hood typically costs more than the under cabinet models. However, many people still prefer this type of hood as it appears to be a more sensible choice to install a hood over a stove that is in an area without cabinets above it.

Ceiling or island hoods are similar in appearance to wall mount vent hoods. However, they are designed for spaces in mind without a wall to mount the hood, so it’s usually over stoves that are placed in a kitchen island. The vents are connected in the ceiling and vents out smoke through the ceiling instead of the wall. Island or ceiling hoods tend to be pricey. However, their look and design are taken into consideration in their design; many kitchen designers and remodelers opt to go with island hoods for their aesthetics. However, if you plan to have your range or stove built into the kitchen island in the middle of your kitchen, then an island hood is the right way to go. 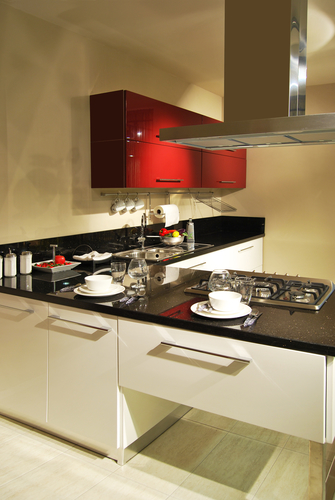 Insert hoods, as the name implies, is inserted into a space in your kitchen. If you want a highly customized kitchen that fits your design requirements to a T, including how and where you want to position your stove or range, then going with an insert hood is the most suitable choice. Manufacturers such as Best, Zephyr, Faber, and Vent-A-Hood can provide the services you need to install a custom range and build it around your space.

Downdraft range hoods work well if you want your hood to stay invisible whenever not in use. However, they are considered to be the least practical choice on our list. This type of hood is connected to ducts under the floors, so the smoke is moved downwards, as opposed to the natural upwards direction. This function is why it’s regarded as a less effective hood compared to your other options. Downdraft vent hoods are still a preferred option for those with stove islands but don’t want to go with an island hood or don’t want to install duct work into the ceiling.

If you’re a home cook, a range hood is a necessity to keep the air in your kitchen clean and healthy. Additionally, it’s an important feature to prevent kitchen fire. Luckily, with today’s kitchen innovations, you have plenty of options. There are plenty of range hood manufacturers such as Vent-a-Hood, Faber, and Zephyr that have various style, options, and features that fit your budget and aesthetic requirements.